Let's review the definitions of trigonometric functions. Let's say you have a right triangle, with the small point at the origin. The angle at that point is θ, the horizontal line is x, the vertical line is y, and the diagonal line is r. 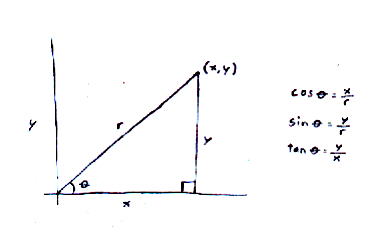 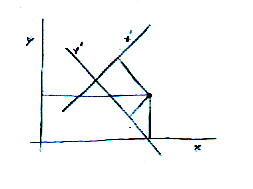 In three dimensions, the new coordinates are given by

If you use l, m, and n to mean the cosines of the angles between the old and new axes, you have

You can simplify it further by calling the coefficients u1, u2, and u3, and the cosines of the angles l1, l2, l3

Let's say you have two sets of axes. The first is xi. The second is xj' and has the same origin as xi, just rotated. 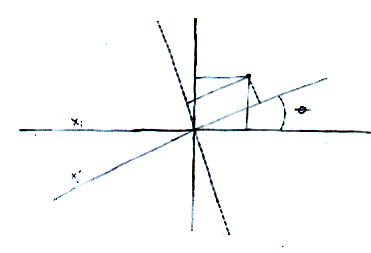 Here I've drawn it as two dimensions but let's say you have the same thing in three dimensions.

How do you change the coordinates from one system to another? Just multiply by the cosine of the angle between them.

which is the same going back, so

This formula works not just for position but for displacement, velocity and acceleration. It also works for force as long as the equations of motion are true in all reference frames. You can break this apart into each of the coordinates of the point. In three dimensions, there are three equations, each of which have the following form:

Together, these three equations comprise the components of a vector. This is what defines a vector. The rotation and translation of axes can be drawn like this. 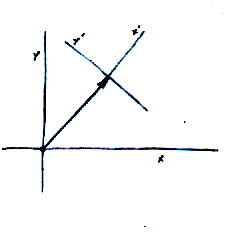 This is why a vector can also be drawn as an arrow.

This is a vector.

These are the components of a vector.

Let's say you were to have two of each of the variables.

These are the individual components, and if you combine them you have this.

If you look at the tensor kik, you see there are two subscripts, each of which could have values 1, 2, or 3. Therefore, there are 32 = 3 x 3 = 9 combinations. For this reason, the tensor can be written as a matrix.

Even though it's a 3 x 3 matrix, it's a second order tensor, since k has two subscripts.

It's possible to multiply a tensor by a vector, and then write it in dyadic notation.

If you have a tensor Kik and you exchange rows and columns, you get another tensor Kki.

The diagonal components of an antisymmetrical tensor Kik must vanish, and since for the others Kik = -Kki, only three independant quantities are needed to specify an antisymmetric tensor, which then takes the form

You now have three values, K12, K23, and K31. However, the vector Ki, where i has a value for each of the three axes, x, y, and z, also has three values. Therefore these three values can be used to define a vector. Therefore, an antisymmetrical tensor can be written as a vector.

δik is the Kronecker delta, and in Euclidean space, is equal to the metric tensor. εikm is the permutation tensor.

where repeated indices are summed so that

The cross product of two vectors can be written as

A vector is usually portrayed as a 1 x n matrix. If it's portrayed as a m x 1 matrix, it's called a column vector. A two-component complex column vector is called a spinor. It's actually much more complicated than that, but this is sufficient for our present purposes. Here's a typical spinor describing a fermion of arbitrary helicity. 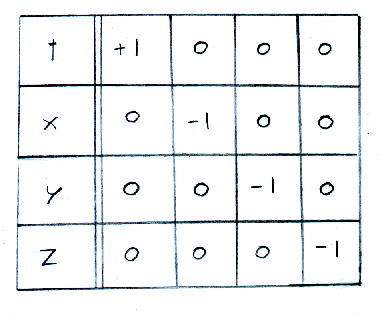 This is a second order tensor where the upper left hand value is +1, the other values in the diagonal are -1, and you have zeroes off the diagonal. The Minkowski metric is represented by guv or guv = Diag[+1, -1, -1, -1]

If you multiply a 4-vector times the Minkowski metric guv, this has the effect of putting a minus sign on the space part. The result is called a 4-covector, and you switch from superscripts to subscripts.

In flat space, the Minkowski metric guv is the same as the metric tensor, which is actually a function that computes the distance between two points in general space. It's derived from a generalization of the Pythagorean theorem. In curved space, meaning in the presence of a gravitational field, the metric tensor has to be a coordinate dependent field transforming in the right way to keep the proper time invariant.

4-vectors are Poincare invariant. That means they are valid in all inertial frames regardless of coordinate system. The components might change from one reference frame to another but the 4-vector is not changed. It's valid for all inertial observers. Luv is the Lorentz transform. It is a transformation tensor that gives relations between different inertial reference frames. 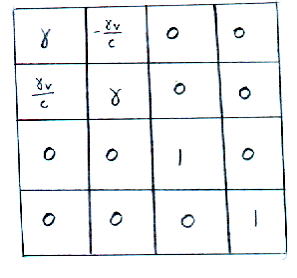 From this, you get the relation between a given quantity at rest, and then its measured relativistic value.

Some quantities are unchanged, such as pressure and entropy.

Usually 4-vectors contain only real components. However, it is possible for them to contain imaginary components. An example is the polarization 4-vector.

i = [squareroot of -1] All complex numbers have the form a + bi. For non-imaginary real numbers, b = 0. For imaginary numbers, b is not 0. For pure imaginary numbers a = 0. If you have a number a + bi, the complex conjugate of the number is a - bi. Here is the general form of a 4-vector.

If you take into account imaginary numbers, it becomes

We use the subscripts r and i to keep track which are real versus imaginary. The complex conjugate of the 4-vector A is as follows.

If you multiply the 4-gradient by itself you get

This is known as the D'Alambertian operator. It is usually symbolized by a square. It was invented by D'Alambert. Who invented the Fourier series? This might sound like a self-evident question but remember that Monroe was not responsible for the Monroe Doctrine. D'Alambert did work on the vibrating string, and in the process of that he and Euler came up with the Fourier series in 1747. D. Bernoulli got the solution as a sine series in 1753, and what we call the Fourier sine theorem followed from that. Fourier tried to prove it in his work on heat conduction titled, "Analytical Theory of Heat" published in 1822, but the attempt at a proof was inaccurate and almost incoherent. It was actually proven by Dirichlet in 1829.

For Cartesian coordinates, it would make no difference if we turn the fractions upside-down.

where θ is the angle of rotation between the two axes. However, this is not in general true.

A'u = [partial derivative of xv with respect to x'u]Av

It is also possible to contract tensors. If you multiply Au by Au, you get a scalar. The process is called contracting, and the result is called the size or norm of the tensor Au. Au Au is invariant. Au Au would not be a constant. The effects of arbitrary coordinate changes do not cancel unless you have upstairs and downstairs indices.

Let's say you have Au Bu = 1, and Au is a 4-vector. Therefore, Bu must also be a 4-vector in order for the right hand side to be a scalar. This method of deducing the nature of the quantities in an equation is called manifest covariance.

The index must be downstairs since the derivative acts on only one coordinate.

The scalar product of two 4-vectors is

The metric tensor is a tool used to raise and lower indices.

For example, in special relativity, the 4-derivatives are

Therefore conservation laws, such as for the 4-current, can be written as ∂uJu = 0.

Tensor equations with indices in the same relative positions on either side must be generally valid. The equation is called generally covariant. This has nothing to do with the word "covariant" in "covariant components".

The determinant of a tensor is defined as follows.

[integral of] [squareroot of -g]pd4xu = constant

These are called components of the affine connection. They are defined by

Here is the Christoffel symbol expressed in terms of the metric tensor.

The following define the covariant derivative.

You can generalize equations by replacing ordinary derivatives by covariant derivatives. The equation of motion for a particle would become

In physics, you frequently use the energy-momentum tensor Tuv. Its value depends on the system. For instance, for a cold fluid with density p0 in its rest frame, the only non-zero component is the upper left T00 = c2p0 In a general frame, you have

where β = v/c and γ = 1/[squareroot of 1 - (v/c)2]. This is similar to the Lorentz transform. You have two powers of γ, one for the change in number density, and one for the relativistic mass increase. For a perfect fluid, the rest-frame Tuv is

In a general frame, the energy momentum tensor of a perfect fluid is

In 1998, a balloon called Boomerang floated around Antarctica for ten days, and measured the anisotropy of the cosmic microwave background to high precision. The conclusion is that the Universe is very close to flat.

However, on small scales, the Universe is curved. General relativity uses this curvature to explain gravitational effects. The Minkowski metric describes flat spacetime. How do you describe curved spacetime?

This is actually a specific example of a more general case called parallel transport. Imagine that you have a square on a plane. If you move a vector around this square, it's always either parallel or perpendicular to the line it's on. The vector is always facing in the same direction. Let's say you do the same thing with a triangle on a sphere where each of its angles are 90o. You can get the vector pointing in different directions depending on which direction it takes around the triangle. 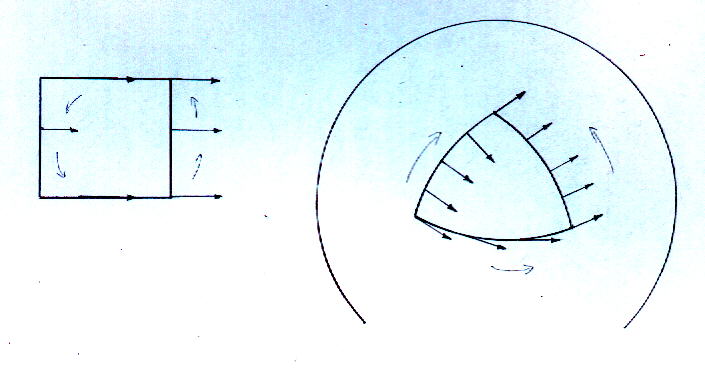 Take the path integral around the loop. The extent of curvature is the change in the vector which is proportional to both the vector itself, due to rotation, and the distance along the loop, to first order, so that the total change in going around a small loop is given by

Since Γ is a function of position in the loop, it can't be taken out of the loop. Make first order expansions of Vu and Γ as functions of the total displacement from the starting point Δxu. For Γ, the expansion is a first-order Taylor expansion. For Vu, what matters is the first order change in Vu due to parallel transport.

There's no first order term because

around the loop. Writing this twice and permutating α and β gives you

which can be written as

Ruv is the Ricci tensor. You can do the same thing again and contract it to the curvature scalar R.

The following is the Einstein tensor Guv.

Notice that the Einstein tensor has zero covariant divergence.